This measurement brief is designed to give an overview of how domestic violence has been measured quantitatively in developing countries.

Most surveys on the issue use one of two terms: “Domestic Violence” (DV) or “Intimate Partner Violence” (IPV). The usage varies depending upon the country, and has also changed over time. While “Domestic Violence” is more commonly used in developing countries, in Western countries, the preferred term has more or less evolved to “Intimate Partner Violence” as an acknowledgement of the fact that abuse can exist in any type of intimate personal relationship, regardless of sexual orientation, marital status, or gender.

Although men too can be victims of domestic violence, and violence takes place in same-sex relationships as well, women are overwhelmingly the victims, and men the perpetrators. Therefore, IPV and DV mostly refer to male violence against female partners, especially in developing countries. The term ‘DV’ is usually not used for elder abuse and child abuse, though perhaps it should be.

Since in South Asia, abusers of women at home include in-laws (and not just the intimate partner), the term DV is more appropriate and commonly used than IPV.

Over time and around the world, domestic violence has been redefined to include non-physical abuse: emotional, verbal, and economic abuse. The Demographic and Health Survey (DHS), for instance, classifies domestic violence into physical, sexual, and emotional violence.

The two main international surveys on domestic violence are the Demographic and Health Survey (DHS) and the World Health Organization (WHO) Multi-Country Study on Women’s Health and Domestic Violence against Women. The DHS has collected data on domestic violence in 54 countries; and the WHO in 10 countries. Following are the respective prevalence rates as per the two surveys.

The Demographic and Health Survey

*At least one act of physical or sexual violence during the 12 months prior to the interview.

Following are the two main questions on DV asked in the DHS. The first measure captures physical and sexual violence; the second, emotional violence. 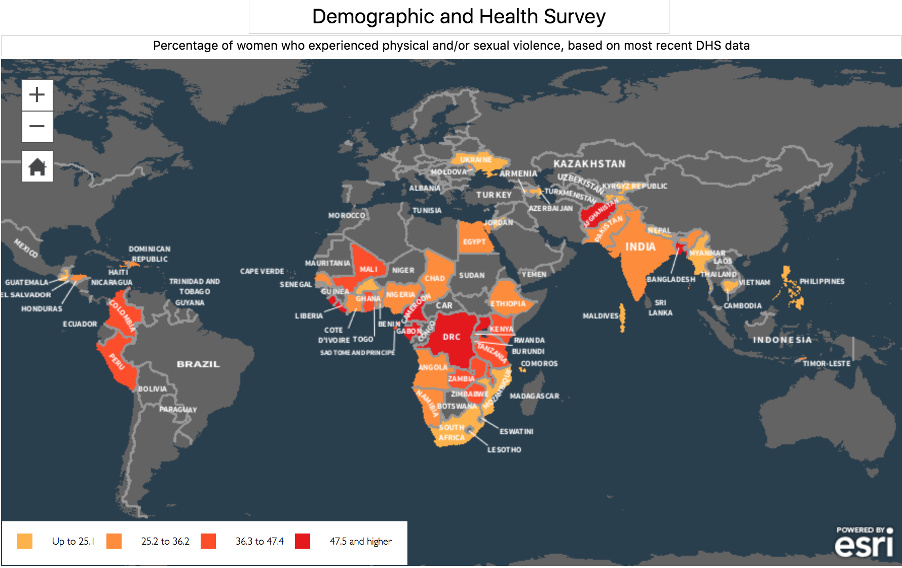 If the respondents answer ‘yes’ to any of the above, they are asked about the frequency of the violence: “often”, “sometimes” or “not in the last 12 months”. The DV module of the survey has about 25 questions. The other questions are designed to capture data on the following:

For the exact wording of the questions that seek the above information, see the Indian DHS questionnaire as an example:
http://rchiips.org/NFHS/NFHS4/schedules/NFHS-4Womans.pdf (pp. 84-91).

Before administering this module, interviewers are asked to ensure that there is no one within hearing distance of the interviewers. If privacy cannot be assured, then the section is skipped. Women who were victims of domestic violence were provided with a list of appropriate local organizations that they could contact if they wanted help.

Many of the questions in the WHO survey are similar to those in the DHS, but WHO collected more in-depth information and had many more questions.

Following are the three main questions in the WHO survey that were used to study domestic violence, focusing on emotional, physical and sexual violence, respectively. 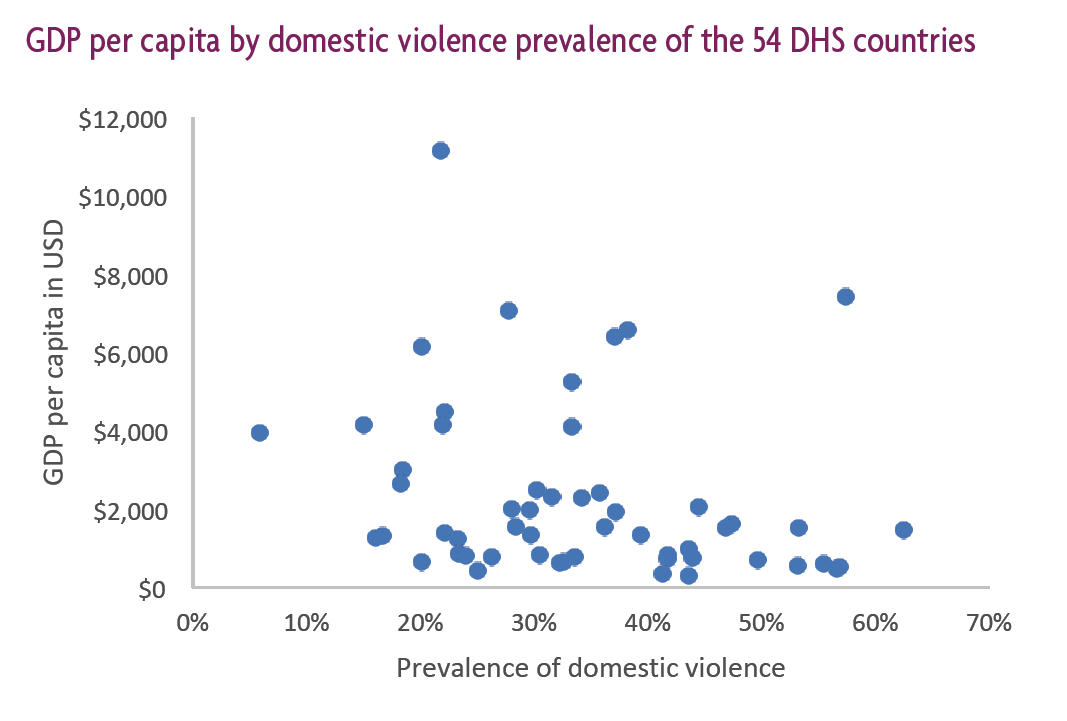 LEFT: As the graph indicates there is no real correlation between GDP per capita and prevalence of domestic violence.

If the respondents answered ‘yes’ to any the above questions, they were asked if the violence had happened in the past 12 months. If they said ‘yes’, they were asked to pick one of the following options: “once”, “a few times”, or “many times”.

Besides the above questions, the survey has about 60 other questions on domestic violence, which cover:

For the exact wording of the questions that seek the above information, see the WHO model questionnaire:
https://www.who.int/reproductivehealth/publications/violence/24159358X/en/ (pp. 147–161).

All the respondents were interviewed in private to ensure that the research would not lead to the participant suffering further harm. If the interview was interrupted, the interviewers were trained to either terminate the interview, or stop asking about violence and move on to another, less sensitive topic until privacy could be ensured. At the end of the interview, irrespective of whether the respondent had disclosed information on violence or not, the respondents were offered a card, leaflet, or booklet giving contact details about available health, support, and violence-related services, often coupled with information on other more general community services.

Overall, the WHO survey captured data on domestic violence in greater detail. It had 64 questions versus DHS’s 25 questions. The difference may have to do with the fact that the WHO survey specializes in women’s health and domestic violence, and is administered in specific rural and urban sites. On the other hand, DHS is a large-scale nationally representative survey that covers many other aspects of family and health for both men and women, in addition to domestic violence.

Bangladesh was the only country where both DHS and WHO collected data on domestic violence. The prevalence rates of domestic violence according to both surveys, conducted about four years apart, vary slightly.

For a more comprehensive understanding of domestic violence, future surveys can include questions on the following issues:

Surveys on domestic violence often face challenges and ethical concerns, some of which are controversial or debatable. These challenges include:

Interviewer Training in the WHO Multi-Country Study on Women’s Health and Domestic Violence
https://journals-sagepub-com.proxy-um.researchport.umd.edu/doi/pdf/10.1177/1077801204265554

Violence against Women: A Statistical Overview, Challenges and Gaps in Data Collection and Methodology and Approaches for Overcoming Them
https://www.un.org/womenwatch/daw/egm/vaw-stat-2005/docs/expert-papers/Kishor.pdf

Guidelines for Producing Statistics on Violence against Women, pp. 91–92
https://unstats.un.org/unsd/gender/docs/guidelines_statistics_vaw.pdf