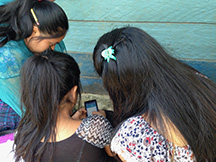 Time diaries provide researchers with data about gender disparities in paid and unpaid work as well as in recreation and other beneficial activities. But there are a number of different ways to collect time diaries, each with particular challenges that may be exacerbated in low-resource settings. With colleagues in Guatemala and Brazil, I tested a self-administered smartphone diary app against the traditional 24-hour recall survey. We sought to determine whether a phone diary developed for users with basic literacy and limited computer experience was feasible for adolescent populations in rural Guatemala and urban Brazil, and to assess the completeness and face validity of diaries. Both are based on a self-report, so we cannot say whether one is more correct than the other, but interviews outperformed our app in terms of completeness and elimination of obvious errors, and did not increase labor or transport costs. Nevertheless, self-administered diary apps have potential for low-to-middle-income countries (LMICs), with some modifications.

BACKGROUND
Most time use studies use interviewer-administered 24-hour recall surveys. A smartphone app to collect self-administered time diaries, completed in real time and possibly submitted remotely, has the potential to make time use research more affordable and less subject to recall bias. Table 1 summarizes the key strengths and weaknesses of these approaches. If our goal is to measure disparities, it is especially important to remember that the factors which most affect the reliability and validity of time diaries are not equally distributed.

APPROACH
Participants aged 12-17 years were asked to complete the diary on one weekday and one Saturday. They were interviewed about a separate weekday and Saturday in Brazil, and only about a weekday in Guatemala. We sent multiple reminders before, during, and after the diary day. We provided remote and in-person support as needed. We provided all participants with data credit for the duration of the study, and loaned phones to those who did not have their own, which included all Guatemalans and 20 percent of Brazilians.

Guatemalan participants—many of whom had never used a smartphone—completed two interactive group trainings on using smartphone features and on the app content. The participants practiced categorizing their daily activities and distinguishing between, for example, when playing with your little brother can be seen as ‘playing’ and when it becomes child care, or between riding your bike as recreation or riding your bike as transportation to run an errand for your family. Most Brazilian participants had their own phones and we provided individual or small group orientations on the app. All of them received a cheat sheet with about 100 common activities and the appropriate categories.

We considered the following characteristics as essential for a diary app:
• Only the most essential information: start- and end-time activity to be recorded;
• Preselected list of 25-30 activities (no writing except “Other” option);
• Possibility of multiple simultaneous activities (checkboxes provided for this);
• Possibility of correcting mistakes, and adding in activities either before or after (not stopwatch);
• Possibility for researchers to update and translate the activity list (without seeking the support of programmers) to use in different settings;
• Ability to function without an Internet connection but be able to send the data remotely;
• Should be open source; and
• Should be Android-compatible.

At the time (2017), I could not find any off-the-shelf app with the characteristics I wanted. The Artificial Intelligence and Data Science Research Group at Makerere University (air.ug) created a diary as an add-on to another app that they had developed for a parallel study.

RESULTS
We found the smartphone diary acceptable to participants with and without smartphone experience, but fewer participants actually submitted a diary than did the interview. Of the 81 participants who installed the app, 25 did not submit any mobile diary data, yielding an overall response rate of 69 percent.

Completeness. Diaries were less complete: while all interviews had 24 hours of activity data, only one-third submitted even one diary with 12 hours of credible activities recorded. Some studies throw out diaries with > 90 minutes unaccounted for or fewer than seven episodes (Fisher and Gershuny, 2013). One-third of the Guatemalan mobile diaries and half of those in Brazil had < 7 episodes. All the interviews surpassed both thresholds. If a method is better at capturing brief or transient activities (as we’d hoped for the diary), there should be more episodes per day, but in fact, the interviews had an average of 17 episodes in both countries as compared to 12 for Guatemalan diaries and 6 for Brazilian diaries.

Data quality: face validity. Most participants began their mobile diary when they got up in the morning, but activities performed later in the day were less likely to be recorded and/or more prone to errors. The most common errors were mixing up of AM and PM, and recording of unlikely concurrent activities. Twelve percent of the episodes in Guatemala and 5 percent in Brazil mixed up AM and PM, usually in ways that could be corrected manually by referring to the preceding or subsequent activities. Brazilian participants were much more likely to record concurrent activities, both correctly (for example, riding the school bus, listening to music, and eating a snack) and incorrectly (doing paid work while at school). Fifteen percent of the episodes in Guatemala and 31 percent in Brazil offered conflicting results about concurrent activities that we were unable to resolve.

Cost savings. The app did not reduce labor costs, even when data entry was taken into account. App training and support required as many in-person visits as interviews. The phones were donated by Fundación Tigo, but there were other costs in terms of the equipment and data credit provided as incentives to participants for writing the diaries.