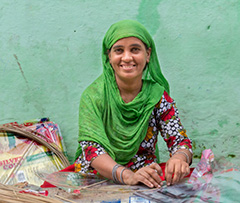 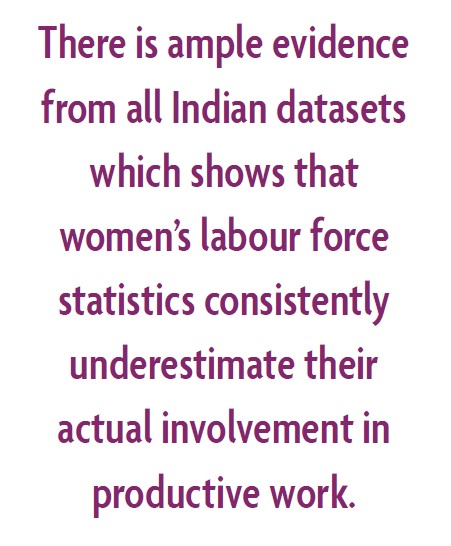 servers, as it has coincided with declining fertility rates and followed two decades of high economic growth. These two preconditions have elsewhere been associated with rising participation of women in paid work, but not in India. Academic literature speculates about whether India is on the declining part of the U-shaped curve which postulates an initial decline in women’s work participation as incomes rise and the share of agriculture declines. It is not clear to what extent, if at all, the income effect explains the decline. In 2011, when female LFPR started to decline, the Indian economy was growing fast. However, after two decades of high growth, the growth story started faltering around 2014, and continues to be low till date. The Covid-19 pandemic has worsened the already declining growth rate and has exacerbated the crisis in employment.

Declining FLFP has also been attributed to factors that prevent women from going out to work, viz., (rising) conservative social norms, sexual violence, stigma associated with working outside the home. The trouble with these explanations is that they don’t fit the stylized facts. The registered fall in women’s LFP has been for rural women. Urban women’s LFP, always lower than rural, has not registered a decline. Within rural women, the largest fall has been for tribal (Adivasi) women. There is no compelling evidence to suggest that rural tribal women have disproportionately been more vulnerable to the norms/violence/stigma factors, compared to other categories of women.

In a recent paper, Jitendra Singh and I analysed high-frequency, longitudinal, national data focusing on a period of four years (2016-2019). This data allows us to track the same women three times a year (giving us 12 waves of data), a feature that other data sets for India do not allow. We discovered a little-known fact about the work participation of Indian women: working-age women transition in and out of the labour force, not just once but multiple times over short periods.

We find that a large proportion of these transitions are temporary: women exit the labor force and re-join in next few waves. More than 50 percent of women who were in the labor force in at least one wave made more than two transitions (exit to entry or entry to exit). This phenomenon of frequent and temporary transitions in and out of the labour force contests the narrative that women are voluntarily dropping out of the labor force due to stigma against women’s work or fear of sexual violence or conservative social norms, as these factors are structural and not prone to rapid and multiple oscillations.

There is ample evidence from all Indian datasets which shows that women’s labour force statistics consistently underestimate their actual involvement in productive work. We show how the irregular and short-term engagement of women in the labour force leads to underestimation of female LFPR. The average female LFPR in our data is around 14.5 percent for the study period. However, around 44 percent of women (more than thrice the female LFPR) were part of labor force in at least one of the waves, with only two percent of women remaining in the labor force in each of the 12 waves. These transitions over a short span of four years indicate that a) actual proportion of women engaged in economically productive work is much higher than revealed by any point estimate from cross-sectional data, and b) women are not held back from productive work due to cultural factors, but are probably unable to find continuous employment which they take up when possible.

This reinforces the point made by others: that it is not the number of Indian women in the labour force which is declining, but the number of hours they work.

As important as the registered decline is, we need to be mindful that even at its highest, India’s female LFPR was low by international standards. It never crossed 30 percent, a number that does not square with ethnographic accounts of women engaged in all kinds of labour as well as survey data showing women’s involvement in family enterprises. Yet these women are not seen as employed as their labour is not “for pay or profit” and thus, they are not counted in the workforce, unlike their male counterparts. This implies that livelihood activities of families (farm or non-farm) run on the backs of unpaid and unrecognised labour by women.

Certain cultural norms matter: my paper with Naila Kabeer shows that the social norm of being predominantly responsible for domestic chores is an important constraint to Indian women’s ability to participate in paid work. South Asia in general, and India and Pakistan in particular, have among the most unequal gender divisions of domestic chores.

Indian women want to work for pay. National level survey data has repeatedly documented Indian women’s willingness to work if work was available either at or near their homes. My latest research shows that when work is available they take it up. The registered decline reflects irregular availability of work, not greater immurement of Indian women.